*Episode 15*
*=========*
The following day was Monday.
I woke up early but was still lying on my bed thinking of what happened yesterday after church and I could remember after church we all came back to the dormitory for our plates and other stuff, we had a nice meal that is fried rice and chicken which most of us love so much but Sandra surprised me and Richard when she asked the server to add that of her’s to our plates so I asked her why she don’t want to eat or is it because she feels shy before us and is there she revealed to us that she has not eaten any food from the dining hall ever since she reported and we were shocked to hear that . I remember asking her whether she can maintain that till the term is over and she smiled and replied that very soon she is going to stop me from eating dining food and I said is impossible since I don’t have much pocket money and she only smiled to that and said that is not my problem.

After dining, I came to the lions den and I was interrogated why I was punished at church service and I lied my way through since I prepared myself for it. I remember lying to the crazy seniors that “I told Richard that I heard it in the morning sports that his favorite football legend (Lionel Messi) has had a fatal accident and the doctors report says there is no way he can play football again and that shocked Richard to shout at the top his voice that led to our punishment” and they all laughed to it and Abortion said this my lie is an April fool in advance.
I jumped on my bed after they asked me to scoop my pepper stew which I did and even added sardine which we ate together.

It did not take long for the syrine to cry and I went out and meet Richard and we did our normal duties after first fetching two buckets of water to prevent ourselves from struggling for water. We did everything fast and was already in the assembly hall before anyone could join us.

The assembly was a little longer than the previous ones because of the announcements but it finally came to an end and the seniors are required to go to their various classes and leave the assembly hall for us.
The seniors left in no time after the assembly and I kept on turning around till I saw Sandra sitting at the other end chatting with her friends but one funny thing was Sandra could not look else where than gazing at me all the time.
She finally came to us with her friend.
Sandra: Goodmorning to you all.
Fine morning *We responded.*
Sandra: I hope you had a wonderful night as me.
By His grace *was our response*.
Sandra: Ok we thank God then. Actually I came to introduce to you my only friend.
Richard: Oh ok.
Sandra: Her name Is Sirina and she is also a science student. Sirina please meet my friends, Jake and Richard.
Surina: Hi
Me: hello, how are you?
Sirina: Am fine by the grace and you?
we are also fine by the same grace *Richard responded.*
We had a chat for sometime and they excused us leaving me and Richard. I turned to Richard.
Me: Boy, how are you seeing Sandra’s friend.?
Richard: Which friend ?
Me: How many of her friends do you know?
Richard: Aww that girl hehe she is cute.
Me: Rich don’t tell me you are not eyeing her because I caught you taking some pictures of her.
Richard: Oh I must tell you the truth, the girl is nice and she deserves a better place in my heart.
Me: So what is your next step?
Richard: Oh leave that to me, you know when it comes to love there is nothing to be compared with the only love doctor haha .
Me: Wow, am lucky to have a love doctor as a friend.
Richard: Haha just watch out.

Finally, closing time approached and we closed from school and went to our various dormitories,had our siesta then from there to dining and when dining was about to close, the dining hall prefect came to make an announcement that all form one students should come to school tomorrow with our health insurance card and anyone who fails to bring it will be forced to get one, this is from high authority.
I relaxed over it because I have one, I asked Richard and he also said he has one too.

After dining we all matched straight to preps and there some seniors came in punishing us for no proper reasons until they heard the voice of our house master (Teacher Akoto) as he prefers we call him.
************************

Preps was over and we went back to our various dormitories, I reached in front of the Lions Den and stood there trying to listen whether there is someone inside already and I could hear a female voice, I finally knocked and was asked to come in.
I entered and in there was Zogaroo, Kingso and his girlfriend Tracy and a new girl which I guessed she was a form one girl because she was wearing a red check.
I greeted them and they responded and i was asked to sit down first and I sat on a chop box.
Tracy: Jake how are you?
Me: Am fine.
*silence for some seconds*
Tracy: Jake, you are selfish, want you ask how I am too?
Me: Oh am very sorry then. Hope you are doing well.
Tracy: By His grace.
Me: We thank God.
Tracy: Jake remember I made a promise to you last time that I will give you my school daughter.

Tracy: Jake am talking to you.
Me: Please I can’t remember and by the way is there anything you want to tell me? If I may ask.
Tracy: Yes!, how do you see this girl? *Pointing to the new girl in the den*
Me: She is normal. *The truth of the matter is the girl in question was very beautiful,not all men can close their eyes to her, she is a beautiful damsel and a s£x idol, I mean she is that type of girls when you set your eyes on you have the thought of having s£x* But I decided to close my eyes to her because I can’t put Sandra in competition with any lady.
Tracy: Jake just be sincere, don’t tell me you don’t have any feelings for Shantel.
Me: *Oh she also has a nice name* inside me.
Tracy: Shantel, How do you see Jake?
Shantel: *Smiled shyfully*, he is a nice guy.
Tracy: Do you have any feelings for him?
Shantel: The problem is with him, as for me I think I like him.
All this while, the seniors were lying on their beds as if they don’t know there is anything going on.

Tracy: Jake, don’t be too difficult, am just trying to help you, do you think she is a cheap girl? , she is the daughter of minister of foreign affairs and I suffered before she understood to follow me here. I did all I could but she refused to understand until I showed you to her in school without your knowledge .
Me: *Silent to their nonsense*
Then Kingso stood up and said ;
Kingso: Jake, am not going to entertain your nonsense here anymore. Whom do you think you are? Can you be an angel? Am giving you small time to agree to this or you will regret getting admission to this school.
Zogaroo: You know why we want you to start f—–g? Is just a plan to stop you from revealing whatever is going on here to anyone. When you f–k, it now becomes our secret but when you refuse it seems we owe you a secret. So is just simple.

Just after Zogaroo comment I remembered the preaching of Miss Nana Konadu in the previous day and I said it in my mind ” I will not follow you to hell no matter what”
Kingso: If you don’t agree, you will not sleep here tonight.
Tracy: He must sleep here because when he Is been questioned by any smart person on why he is out from here, he will be tempted to reveal the secret.
Zogaroo: Yes. Now Shantel, this is your bed and this is your boyfriend from today, no one has any competition with you.
Shantel: *Smiled and nodded to him*

I bowed down my head after the crazy seniors came into the matter and remained silent until I heard a knock on the door.
They responded and Benita, Agi and Abortion entered.
Kingso: But where are the others? I mean Bells and Jezy.
Agi: The security man is still trying find his way out to bring them in.
Zogaroo: But where were they when he came for you?
They were in the other dormitory and we could not call them.
Me: *So there is a security man behind all this?, oh nice to hear that* inside myself.
Benita: But what is Shantel doing here? *with a worried look*
Tracy: I brought her for Jake but he is proving difficult.

Benita: No, Tracy is too early for this.
Abortion: Beni you are not getting it. The two of them knows whatever goes on here so I believe f—–g themselves will help shutting them than a mere threat.
Agi: That is very smart of you.
Kingso whether you like it or not you are going to sleep with her today.
Benita: No!
Tracy: Why Benita? Are you already in love with him?
Benita: What kind of nonsense are you asking me?
Agi: Then why?
Kingso: Shantel go and sit on his lapse.
Shantel: *ignored her command at first*
Tracy: Did you hear that!!? Don’t let me make you smell pepper here. You are to do whatever we ask you to do.
Shantel: *Stood up unwillingly and came and stood by me.*
Me: *I refused to stretch my legs to give her a space to sit on*
Then Abortion became angry and removed a pallet from under a bed and hit it hard on my leg and I screamed then stretched it.
They then commanded Shantel to sit on my lapse and romance with me and she shamefully sat on my lapse.
Me: *wow, what a smooth soft buttocks* inside myself but refused to admit it physically.

Tracy: Kiss him.
Shantel gave me a kiss and I refused to respond.

Tracy: Continue kissing him and rob your b00bs against him.
She did as directed and oh my God. My innocent d–k started nodding to the music. What should I do? Oh God save your servant. 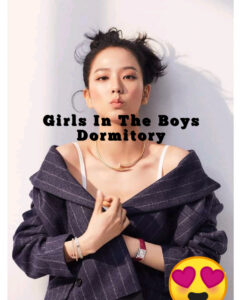 Girls In The Boys Dormitory. Episode 7-8