I looked out of the window as the car speed off.
Prince Kyle kept on picking different calls from different angles, guess he’s too busy to even look my way

I looked out of the window trying to erase the pains and boredom in my heart.

he got no time for me,then why did he married me?
well,i think I have got the answer to that
cause with the look of things he actually married the throne,not me!

the car kept on moving and the driver pulled into what looked like an airport.

I shrink on catching sight of the large bill board

it was boldly written with bright coloured letters
don’t tell me he owns all this?

I took a glance at him and he looked damn busy,
obviously replying tons of messages,emails and answering calls
I felt so much pity for him,if only he would allow me help him out with it,
too bad! he’s a proud and pompous jerk

holy shit!
“this is beautiful”
the sight of the private jet in front of me ,made me realise how wealthy my husband is.

written on the plane was ‘Prince Kyle Airline’

putting all Nita,had told me about him,I knew he’s a money bag

but I had never imagined he was gonna be cold to me nor am gonna end up being his wife.

he kept on screening his phone,
two at a time
geez!
he’s damn busy
our honeymooning is gonna be super boring cause he’s never gonna say a word to me.
all he’s gonna do is to work and work all day

yikes!!
who does that during honeymooning?
isn’t he suppose to drop every call,deals and contract till our honeymoon is over?

well,this Is just enough for me to be totally convinced, that he cared less about me.
I guess he won’t mind killing me if he had the opportunity to.

the Maids and guards we had left with, carried our luggage into the plane

oh! no
his luggage
cause i had no opportunity to pick up a clothe, not even a comb

I think I would have been more excited if he left without me in the first place.

“are you gonna keep moving or stand there like a statue?” I heard his cold voice
and it gave my heart a sensational feeling and I suddenly realised I had stopped moving and he was already ahead of me

I watched as the maids and guards chat away silently in whispering tones and I suddenly wished I am happy like them
I stood beside prince Kyle,looking confused and transfixed same time

what if he yell at me or something?
I won’t be able to get over the fact that the maids are watching

I took in a deep breath,trying to gather the strength In me to go sit near him,when he spoke in his usual cold soft voice but I was able to grab what he said

“can you go sit somewhere and stop gluing to me like a disease?” he rasped and I found myself going over to a seat,three seats away from him

serves me right!
next time I will make proper use of my head

I looked out of the window,surveying the fresh air of Cairo
I couldn’t see the beauty of the town cause night was fast approaching and I was damn tired from the boring flight we had took

worst still i didn’t have a phone
mum feel it wasn’t right for me to own one ,since she locked me up

“good evening ma
good evening sir”group of maids,guards and stewards greeted us as we moved in

I felt so tired to eat nor check it it beauty of the house,all that where on my mind was a warm shower and my legs spread in a bed as I sleep

I got into the large room and flounce into the bathroom for a bath,
I came out of the bathroom wearing one of the nighties I had found there

I quickly lay on the bed,covering myself with the duvet
*
*
I had slept for hours when I felt a tap on my shoulder

gosh!
am not yet ready for it

“hey!” he called and I looked up at him

“get off the bed!
we are never gonna share it” he said and I heard a loud bang in my head

“where am I gonna sleep then?” I asked
“maybe the couch!
now get the f**k off the bed before I shove you off” he rasp and i stood up,walking over to the couch in the room

Married To A Prince. Episode 21

Married To A Prince. Episode 12 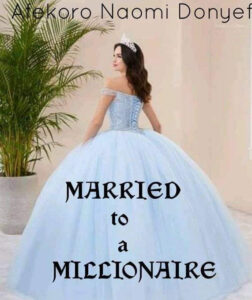 Married To A Millionaire. Episode 32-33 (Finale)