As I tucked Zoe into her bed under the snug duvet and sat down beside her bed, I felt her temperature and pecked her forehead. She kept on making seizing sighs in her sleep as I had beaten her earlier on.
The only time Zoe was sweet was when she behaved matured but when she really acted her age, it was usually the opposite.
I was not in a very good mood since morning but I still tried my best to pick her up from school since she didn’t like the school bus.

On the way, she saw some vendors hawking these locally made ice-cram and yoghurt and she kept pestering me to buy for her. I kept mute because I didn’t know what to say to her but when she started buzzing in my ears like a swarm of bee, I shouted at her.
“Zoe! Zoe! Zoe! How many times did I call you?” I almost screamed. She covered her ears and looked away in irritation.
“Three” she replied
“Please, let me concentrate on driving. I spent how many hours last week making you ice-cream and yoghurt at home. You still have many bowls at home and now you are telling me nonsense!” I exclaimed and she looked at me, surprised.
That’s it o daughter! Every day is not Christmas.
But she complained on and on and said she wanted the cheap ones the vendors were selling.
Well, to please her, though I was so angry that I made full creamy ones for her that were already frozen at home and she was choosing the chemically sweetened one, I parked the car and went to buy a packet that contained 12 pieces.
As I dropped it on her laps, her eyes shone with delightful shock.
“Now, can I drive on in peace without disturbance from anyone?” I asked and with a mouth full of creamy liquid, she smiled and nodded.
I drove on in silence. I wished something could silence the raving thoughts in my heart.

I heard about the activities of my husband as a Casanova and really it wasn’t a surprise that he was sleeping around with anything in skirt because I had caught him red-handed with his secretary on two occasions.
It was since that occasion that we had separated rooms and I didn’t allow him to touch me again. I couldn’t bear to allow him infect me with incurable diseases. But listening to many of my staff members today saying he had lain with almost of the women in my organizations, I became very uncomfortable.
With that on my mind, I went to the media organization where I worked. I worked with CNN Nigeria and my name had really become a household name. I was popular!
After an interview session with the Federal Minister of Industrial Relations, he had come close to me and without any restriction, placed a kiss on my lips.
Oh my God!

How do I describe how I felt?
If I said irritably or angry or sad or disgusting and all, I would be lying to you.
I felt happy, tingling, excited and great!
But, when I called back my senses together, I pushed him away. As much as I had not been with a man for about six months now, I was not a call girl or a cheap lassie for some political bigots! The only man I had slept with out of wedlock was the one that I paid to get me pregnant from which I had Zoe and I paid him.
I would not even recognize the man if I saw him now.
The minister was furious that I pushed him away and he went to report me to the general manager who lambasted me and said my popularity was getting into my head and that I would have to cooperate if I still wanted my slot!
What a threat! Didn’t he know my stand before?

While all these were happening, my mother-in-law called to say she had really come and that she was going to stay for some days. That spelt trouble for me.
All these on my mind, I was as mad as all the patients in ARO psychiatric centre joined together when Zoe was crying over minute things like Ice-cream.
As I got home and zoomed into the compound, Zoe had slept off, the pack of ice-cream clutched to her chest. She was able to take just 4 of it and there was 8 pieces remaining. I was angry the more. I pulled her inside the house and forced her to gulp the thawed substance down her throat. Her pleas fell on my deaf ears as I held a cane close to her face.
“Next time, when mummy says yes, you will learn that yes would be good for you and not any other option! You have to finish it o” I threatened her.

As she finished the second one, she threw up and it splashed all over the well mopped floor of the sitting room and my clothes were stained too. Then I gave her six strokes of the cane out of anger.
“Don’t be greedy!” I repeated as I beat her and she cried and cried.
As I mopped the sitting room again, the door opened and there she stood, looking remorseful and pouting sadly.
“I am sorry mum” she had said and turned back to her room when she heard no response from me.
Now, I felt so bad for beating my only friend and confidant, and joy, and life, and my everything! I rubbed her cornrows and my heart ached for her.

_____________________
“Nita! Nita o!” my mother -in-law called out and I frowned sadly.
“Yes ma” I replied, switched the bedside lamp off and left the room.
Zack’s mother was seated in the sitting room, her legs were on the stool and she pulled at a piece of a drumstick with lots of broken bones in the deep bowl before her.
“Mama, do you need more drumsticks? We still have lots in the freezer” I said, twisting my mouth. She eyed me and then signaled that I sat down.
“Sit down here” she said and I obeyed.
“Well done mama. I hope your journey was not stressful” I asked, trying hard to be nice. She chuckled
“Thank you o. I know you are just trying to be courteous” she said and laughed and I only arched my eyebrows as I rubbed my hands together in anxiety
God, just help this woman to talk nonsense today!

“Mama, you wanted to say something?” I asked, anxious to leave her presence
“I hope you are not angry about the other day when I asked you to prepare pounded yam and that I said I was already close to the house” she said and laughed so much she started coughing. She brought a handkerchief out and spat into it. I turned my face away and she laughed again
“Your mother!” she exclaimed abusively, lashing her tongue out.
What a childish mother!
“Your husband told me that you have not been cooking for him for some days now and I had to play that prank” she explained on.

Who asked her now sef?!
“Mama, let’s forget about that and let’s talk about something else” I said almost aggressively. I was getting really angry already. She wore a serious face and touched my laps.
“Nita” she called and I became attentive too
“Ma?”
“Are you barren?” she asked and i looked at her from head to toes and eyed her so obviously.
I hissed and she took her hands from off my laps

“Why do you ask our dear fruitful mama?” I asked disdainfully
“Don’t you think you need to give us another child after Hauwa?” she asked. Hauwa was what she called Zoe.
I wished I could scream and say even the Hauwa wasn’t his daughter and that her son was as barren anything!
“Mama, how many children do you have if I may ask?” I started as the spirit of strife descended upon me. She looked at me and became mum, rubbing her fresh leg on the stool

“Mama, can’t you ever be satisfied or grateful to me? I married your son out of pity and I gave your hopeless situations life again. I have my salary job and I am okay with the money paid me there. My businesses that have yielded me a living, I carried all, and gave them under the flag of Christianity to that miserable useless cheat!” I screamed at her and she could not look into my face as she shook her legs.

I didn’t even know if what I was saying was sinking into her medulla oblongata
“Here you are giving me lectures.
What lectures should come from your mouth to me! Isn’t it my family and I that we should sit down and lecture, smack and feed your senses with lectures?” I screamed again, my voice shaking furiously.
I didn’t know what kind of human beings these people were! I felt like doing something very evil! 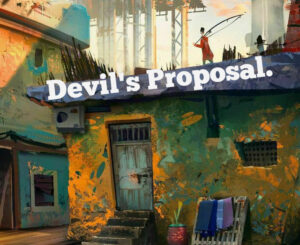