EPISODE 10
Kira
I walked inside the class and my eyes meet with Tinashe and she faced down.
I smirked i,i must find out who attacked us whk ruined our lives and my friendship.
My face breaks into smiles the twins are here.i walked to my sit.

“Tessa,Lina.” I exclaimed and ran in to hug them.
“Kira.” They both exclaimed and we hugged.
It feels so good to have them back,i won’t be alone for the meantime.
Miss Kim walked in.and we all sat down.she was looking at me scornful.and i don’t know why.
“Learners i want to tell you something.” She announced.
We all kept silence.
“As a student you must focus on your studies and not men especially teachers.” She retort.
“Some students cross their boundaries and if we caught you redheaded and you will be expelled.” She smirked staring at me.
Everyone in class stared at each other and start whispering.
“what is she talking about.”
” has she lost her senses.”
”What’s wrong with her.”
”really so who it is.”
”she love to poke her nose in others business.”
“Shut up all of you.” Every went dead silent.
“There’s is no difference between a married woman who run after her colleague and that learner,at least she is not cheating.” Tinashe eyes met with mine.
I saw a smile crept on her lips and she hid it immediately.
Miss Tinashe was stunned.
“I don’t say she is right but first before you correct someone correct yourself right” Tinashe concluded.
I glanced at her and she stuck her tongue at me.
And found myself giggling.i miss her she is funny colorful and full of butterflies.
“You all suck.” Miss Kim said.
“When your husband finds out,you will be broken and all alone don’t play with him.he married you because he loves you and has that hope that one day will change
So Miss Kim it’s up to you that the day you will make it come and change or you will don t and be left alone,you
Don’t know what you got until it’s lost ma’am i know it’s not in my place but i know how it feels.” Tears rolled down Tinashe’s eyes.
And my eyes watered.we stared at each other i wish i could hug her now.
But i can’t and why is she behaving this way.did she find out the truth,could’ve been that Andrew talked to her.
Miss Kim was crying she picked her things
“Thank you Tinashe.” She mouthed and ran out.
*
Tinashe
When i found out everything.my heart pricked.i want my friend back.
I have ruined everything but she was not listening to me,so i had to go.
Sometimes when someone is not listening we just have to walk and that’s what i did.screaming at each other is not helping
Because she didn’t want to listen and i,i was not willing to give up so easily.
But i lost and i couldn’t do it anymore.
When Justin called me to the basketball court
I heard things that broke me down and.
Those fake two girls will pay for everything they have done to us.it’s just a matter of minutes everything will be set okay.
Now that miss Kim is gone,i was able to change her heart and they’re now by themselves.
They will feel it on me.

********
Kira
“That was rude of Tinashe.” Tess said.
“Why do you say so.” I asked her.
“What does she know about her love life.” Lina said.
“But she was grateful.do you know what I stand with her,we all learn from each other it doesn’t mean us learner can’t say anything if we see something wrong.”
And i feel bad too that i love my teacher but i can’t go back now.now miss Shina is left to take out.the will be alone.
“Even after i took her out she is still a threat.” I heard Tess say.
“Who.” I asked.
“Did i say something.” she said.
And i stared her.is she kidding me.i shook my head.
The bell rang it’s lunch time.we pack our bags.
And i was stunned to see Justin and Tinashe together.
Those two don’t get along and before the whole saga between me and him began.
They walked out from the class chatting and laughing together.
This is my chance to find out the truth about the attacker.
*********
Tinashe
“Justin this is the right time to expose those them.” I smirked.
“Sure it is Tinashe and for the record you owe me one.” He punched my shoulder.
“Ouch that hurts jerk.” I pinched his cheek.
********
EPISODE 11

Tinashe
We walked to the cafeteria,I’m so happy that everything will be fine Kira and i.we will be together again.
“Tina I’m really sorry sis.” Justin said.
And put his arm around my shoulder.i miss us.

Justin is a jerk, i used to help him to hide some black rubbers in the garage in the back at home.
But when i heard that they want to frame him.i took them out and i found a gun.i was shocked as to why.
Does he need a gun. But at confronting him we ended up having a big fight.
i was afraid that he was doing someone illegal but he said the gun was not his.
But still i didn’t believe him,so in anger i told him not to talk to me again.
But he stopped coming home.and i got more angry with him.i was looking out for him,i do trust him.
I was just angry that he is involved in something dangerous.
Now back to businesses.
“Where is the camera.” Justin asked.
What!! i forgot it in classroom.
“I forgot it,i will fetch it now and i will catch you up in the cafeteria.” I said.
“Sure do that.” He remarked.
I hurried to the classroom. I walked to my sit.
*
*
Kira
Tinashe ran back to classroom and she passed me,i felt my heart sink.
I was beginning to feel restless and i don’t know why.
“Kira we forgot something,in the classroom.” The twins said.
“Now,soon lunch will be over so let’s eat.” Tess said.

“We are coming it’s your suprise.” They both said smiling cutely.
“Really then you can go,i want to see it.” I was smiling even though i felt some how.
They both walked away.
*
Tinashe
I was searching for the camera where could i have put it.
I heard footsteps getting closer.i turned around.
*
EPISODE 12
Tinashe
“Why is so hard to remove you on our lives.” Lina said.
I stared at them.
“What is it now,haven’t you done enough.” I stared at my nails.
“We did everything in our power to remove you from Kira’s life.we did everything to make you hate each other.” Tess said.
“Oh really.” I gasped and smile at them.
“You think i don’t know that i do know that very well.” I said.
“What you know.” They both exclaimed.
“Tessa,Lina you did what.” Kira walked in.
“Yes we did it,and what will youu do.” Tess said.

“How dare you.” Kira gave Tess a hot slap.
“Why did you do that.” Lina yelled.
“You skinky keep quiet.” Kira said.
I will slap you again.
Skinky that’s a made up word Kira will never change.i smirked.
“Why did you do it.” I asked.
“Because you take her away from us Tinashe,she began to spend more time with you and I’m jealous okay i am.” Tess said.
“Do you know what that coursed,everything got ruined.” I retorted.
“And you think i care,no i don’t care at all,if i get a chance again i will do it,and her Lina she only did what i say.
She is so dumb that she can’t think.” Tess yelled.
Lina burst in to tears i felt sorry for her.
“Tess shut up,she is your sister how can you say such horrible things about her.” I slapped her.
“I will ruin you all of you and your secret Kira will be exposed nah i won’t do that.instead your lover will ruin you.” She yelled.
“I’m not coming back to this school,and Lina follow me.” She scoffed.

“No I’m not,you can leave.” Lina said.
“Well suit yourself.”
“As for you Kira,your time of tears has come,you love him don’t you.well love him after you find out about his dark life.” She laughed.
Tess is crazy i swear.we all stood transfixed and watching her like a movie.
“Should i tell you,i won’t wait for tonight 7 o’clock sharp.” She walked away.
*
Kira
I was eating when Justin ran to my table and saying that the twins are.fighting Tinashe.
At first i didn’t believe him because he could me lying to me.

Also, read  Falling For My Biology Teacher. Episode 2 and 3

But he looked dead serious so i had to.follow and now I’m shocked.
The Twins are behind all.and Tess is not ashamed.
She even insulted her sister.
And what secret is she talking about,I’m feeling more restless what will she do.
I’m really scared if i.say that I’m not scared i will be lying. 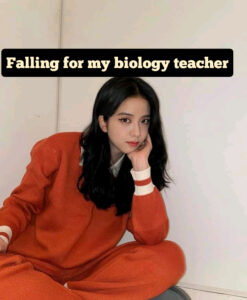 Falling for my biology teacher (Finale)

Falling for my biology teacher. Episode 13&14

Falling for my biology teacher. Episode 8&9