CHRONICLES OF THE STRANGER
AFFLICTED
Episode 12
The Stranger appears…things are going to heat up!
Read on…
They are a little scared, but Reverend Obuobi only laughs.
REV. OBUOBI
You have the impudence of an unbeliever, and of course I don’t want to taint the memory of my dead father with a show of vengeance, otherwise you would not have been able to walk out of here on your own two legs! The man you so obviously want to fornicate with is sick, very sick! I was trying to help him, to break the curse on him, but I lost my uncle, and in my grief I have not been able to pray for Akoto. You should leave him here so that we pray for him, or you can take him away. The choice is yours. But remember, if you take him away, he will remain the way he is now. He will never get well!! The ushers will show you where he is! Come, brothers, let’s go and plan!
The men file past Amina and head for the entrance.
An usher comes towards Amina, his face scared, and speaks to her.
USHER
Please, follow me! The cursed one is in the Miracle Room!
Amina follows the Usher to the Miracle Room.
The young man opens the door, and when Amina enters she stops suddenly and great sobs rack her body at what she sees!
Akoto is sitting on the floor with a leash around his neck like a dog, and the end of the leash is chained to a concrete pillar.
His lips are twisted savagely to the left, and his fingers are gnarled and curled and stumpy with leprosy.
His legs have shrunk like a cripple’s!
He stinks because evidently the room is not hygienic, and he has urinated on himself several times.
It seems he has been starved, and so he has not soiled himself with faeces, thankfully.
Amina is horrified!
She can barely see because her tears are falling hard.
Akoto sees her, and he tries to speak, but he is too weak, and tears flood his face as he makes weak gestures towards her with his leprous hands.
Kesewaa has followed Amina!
She has not seen Akoto again since the night he had been taken to the Miracle Room.
What Kesewaa sees shocks her so much that tears come into her eyes immediately!
KESEWAA
(stunned, aghast)
A. N.! Oh, dear Lord!
Amina can barely walk.
She stumbles forward and sits on the floor.
She gathers Akoto into her arms and holds him tightly.
AMINA
Oh, Akoto! My love! My only love! What have they done to you? Get the damn chains off him this instant!!
USHER
(rattled)
Yes, Miss!
He goes out and comes back a few minutes later with a bunch of keys and unlocks the leash around Akoto’s neck.
KESEWAA
(tremulously)
I didn’t know! Oh, Akoto! I didn’t know! I’m so sorry!
Amina looks at Kesewaa with acid in her eyes.
AMINA
Well done, Kesewaa. Go and marry that pastor, and I wish you all the luck. You know something? I’m going to care for this man, and I don’t care if he doesn’t get well. I’m going to stay with him, and love him, and make him happy so that he won’t even remember the nightmare you are!!
Akoto hears everything, even in the darkness”>darkness of his afflicted soul, and he turns his face into Amina’s neck and begins to weep pitifully.
Kesewaa, shattered, cannot take it anymore.
With a sob she turns and flees from the room!
With the Usher’s help Amina takes Akoto to the washroom and cleans him up.
She also cleans the room, and they carry him to a bed in the Miracle Room.
Amina goes out and buys water and other milo and prepares his favourite drink for him: cold cocoa drink.
She feeds him, and he eats hungrily, and this makes Amina cry even more!
To see a rich boy who has everything at his beck and call reduced to such a shell really tears her heart apart.
She looks at him out of her loving eyes and kisses his cheeks.
AMINA
My love, I’m going for an ambulance to take you to hospital, okay? Don’t worry at all! I fasted and prayed for three days, and I had a recurring dream in which a tall stranger in a black suit kept telling me that everything is alright. I’m sure God has heard my prayers, and things will be alright. Don’t worry, love! I’ll be back soon.
Akoto smiles out of his twisted lips, and Amina leaves quickly.
She decides to go to the Eden Hospital, where Maame Akua is on admission, and arrange for an ambulance for Akoto.
She gets out of the taxi at the entrance of the huge hospital just as a huge, black, sleek Escalade with tint windows comes to a stop.
Amina pays the taxi driver and as she begins to walk towards the hospital she casts an admiring look at the Escalade again.
The driver’s door opens, and then he steps out!
Amina comes to a complete halt!
She is shivering as her mouth opens with a combination of shock and horror!
The man who has emerged from the luxurious car is tall and handsome.
He is wearing a black suit with a white shirt and a black tie!
A circle of hair around his lips formed a moustache and a beard, and he is wearing a hat.
He is also wearing dark shades!
He is the stranger!
The man in her dreams!
The one she sees in the maze in her dreams! 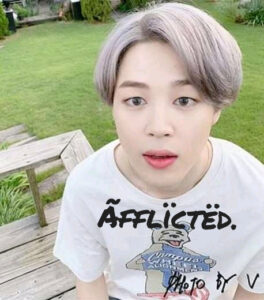