EPISODE 4
Kyong’s pov
I started having Mix feeling for Surri with the way she had clung onto me last night.
I suddenly felt the need to just be around her..

I took her to the BIGGEST MALL in Korea and asked her to take anything she wanted. She was too suspicious and uncomfortable so she took just a pair of snickers.

I payed for them and we left, then I went behind her back to order a dozen outfits for her and shoes too.

As I drove pass the streets, I decided to stop at a Poncey Restaurant so we could eat.

I ordered for food. I started eating first so surri would eat too. She joined in no time and we finished our meal.

I looked at my phone there was still time… I thought of another fun activity we should do.

She agreed happily.
We arrived at the games CENTRE. I payed for VIP cause of my identity.
………. Minutes later
I did my first shot and I knocked down all the bottles. It was Surri’s turn. She threw hers and it only knocked down half of the dummies.

I began teaching her. She was a fast learner. We played the game for two hours before we went back home.

Oprah’s pov
I was angry and sad. I still haven’t recovered from the shock I got from the way Kyong spoke to me.. Infront of that simpleton!

Surri’s pov
I turned on the shower as warm water came flowing down. Kyong, he was so nice to me… But why?

I thought he would hatee cause of the kiss and what happened the previous day.

But I was very happy… Cause I love kyong.
Not for his money… But for his voice and everything. He’s my crush!

After putting on my pj. I laid on my bed and turned on the TV. It was a wrestling show… Between Koreans and Thailand.

A knock came on my door and it opened.. It was kyong.
I adjusted myself so I won’t look benty or anything.

My heart began beating fast like a party drum. I looked into his face.

“Let’s go swimming outside “he said referring to the pool behind the mansion.

“But its cold outside “I objected.

“Are you coming with me or not? “He asked and turned leaving the room.

“Am coming! “I said and ran after him.

But I don’t have a swim suit. We got to the pool. It wasn’t too cold outside.
Kyong took off his shirt, he had only his shorts on. He jumped into the pool.

I was too shy to take off mine. Kyong popped his head out of the water and dragged me. I fell into the water but he held me.

I was forced to take off my pants and shirt. I had only my undies on. I was super shy and couldn’t really get to look into kyong’s eyes.

He held me by my waist and pulled me close to face him.
I soon felt his lips on mine and this time.. It was a real kiss.

When he disengaged and looked into my face. I was feeling guilty with the kisses.

“Am your sister Kyong, this is not right “I said.

He scoffed.
“My father is not my real dad “he said.

…. I didn’t know.
“But you kissed me cause you like me? “I asked but then I regretted asking.

“Yes.. “He spoke nervously “am starting to like you ”

A big smile crept on my face. I was extremely happy.

“I know we don’t know each other much to start a relationship.. But am willing to let you take your time and know me, the real me. “He said and I hugged him.

After a while, we got out of the pool and went into the mansion.

I wore a new pj after drying my body. Kyong have a weird way of proposing to someone.. Now am freaking cold!

I went to kyong’s room to check up on him. He ushered me in and we slept beside each other.

“Surri, can you sing? “Kyong asked.

He nodded.
“I have to release an album soonest and them tour on it bit I have no inspiration yet ‘he said.

“Kyong, your dad is your inspiration “I said.
He paused and suddenly became quiet.
I slept off soon.

Oprah’s pov
“He what?! “I yelled into the phone.

“They were together last night. I bet they had s£x “my minion, Min hu said.

I know mr Sam is not Kyong’s biological father so he has the right to date Surri without affecting any rule.

Urgh!! I nearly smashed my phone. Why did I ever find that girl?? I should have won kyong’s heart first before bringing that Worm into his life!

I’ll cook up a plan…
She’ll be gone in no time.

Surri’s pov
I woke up and I was happy to see kyong beside me. He was awake.

He replied too and went into the bathroom. I rolled my eyes and went to my room and freshened up. There was a bunch of clothes aligned in my room, must be kyong’s doing. I was happy.

I came down stairs for breakfast, kyong and I ate in silence. What did I do?

“I don’t know what you’ve done to me Surri. Am not liking the way I feel right now. “He replied and I paused.

I completely went numb.
I didn’t know what to say, Infact, what feeling??

“Some part of me, wants you away from me… Forever “he said.

Before I could react, the door burst opened and mom and mr sam stormed in.

“Surri! Pack your things, we’re leaving this house!! _she said out of rage.

“But why? “I asked standing up to meet her.

“Am going to divorce mr Sam! “She said. 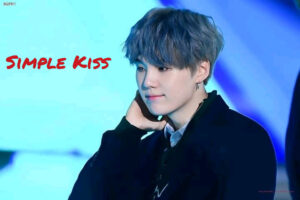 A Simple Kiss. Final and Epilogue