ON THE LIONESS TAIL.
Episode 12.
By AMAH’S HEART.

” How do you mean?…I don’t understand.

Kaya walked round the room rather in a haste before turning to face her sister.

“That is what I was told in the dream Maya, I have been beseeching the gods to be kind and show us another way for your husband to get well so that I can return to Zukumo. It was until last night they dropped those words…

“Is confusing, you could have asked them what they meant by that. How do I stroke the dust, what is reaper… I don’t get any of this Maya. I’m exhausted from cries and worries as I waited for the gods to redirect but after such a long wait look at what they came up with, Is as good as nothing because I don’t understand what exactly it means…or how to go about it. Kaya you have to seek them. You can’t go back to Zukumo without giving me a solution to my husband’s sickness… please.

” Maya I just gave you a solution. If you had followed the first one correctly we won’t still be at this spot but you forgot all that was said and did everything wrongly. We’re still battling this whole thing because you failed simple guidelines that could have saved life, time and emotional torture. I’m going back to Zukumo nevertheless. Somebody is in trouble…I don’t know who yet but they beckons on me to return.

Maya went to Kaya, took her hands into hers and said.

“You have to help me Kaya. Please…ask the gods what they meant. If you return to Zukumo how will I cope through all of this? Howww???

Maya opened her mouth as she thinks deep.

” So somebody is behind all of this? But who could it be. Everyone is nice here except during this hard period that they begun to react differently. Could it be Maran…oh! Is Maran. That woman is a bitter woman. She is probably jealous of me because I have a lovely family moving but she has no husband, only her daughter. Her daughter stopped coming here after my husband became ill. Is probably Maran that asked her to stay away from us. Is becoming clear now… there is nobody that can do this except Maran. I have no doubt about it. The gods will expose her, the gods will punish her, the gods will strike her hard as she has stroke me. It will never be well with Maran. She is only jealous of how blessed I am. Bitter woman…evil woman. May all her evil schemes be exposed. It will never be well with lady Maran…

” I’m going back to Zukumo, I have over stayed in this village because of you. I’m glad the gods finally answered our request for a solution. Maya, please don’t make another mistake…and wait until the sun settles in the tent of the reaper before jumping into conclusion.

As Maya walked Kaya to her horse outside, she did not stop cursing Maran out loudly.

Kaya saddled her horse and rode off with speed.

She was pleading to the gods to keep her parents safe as she speed off.

Zain sneaked in quietly to the kitchen where Opa pot of food was kept.

Opa has finished cooking Dre’s favorite meal, she dished out his food, covered it up and left to inform Dre if she can serve his food right away or later.

Zain who has been very watchful, saw Dre’s food covered, she quickly opened it and closed it back as her hand began to shake.

She brought out the content but couldn’t put it in the food as her heart beat doubled up.

She tried again but suddenly heard Opa’s footsteps coming.
She covered it immediately and rushed to another corner. She hide the poisonus content in her cloth.
Zain pretend to be doing something else as Opa entered.

When Opa saw her, she greeted her kindly and said.

” …I made enough sweet porridge with smoked lamb. Will you like to have some lady Zain?

Zain didn’t bother turning to look at her.

She quickly rushed out leaving Opa in the kitchen.
Opa went ahead to carry the food to her husband.

The next time, Zain was watchful as Opa was making food.
She has made up her mind to carry out her mission without delay.

As she entered the kitchen, thinking opa has gone out.
She was shock to see Opa still in the kitchen.

Zain waited for Opa to leave as she stayed back while pretending to be busy.

After sometime, Opa left but she suddenly remembered that she forgot something in the kitchen, she returned back to get it.

Zain who was moving to the food plate was startled to see Opa coming.
The poison that was wrapped in a paper fell from her hand to the ground.

Zain was unrest, she was shaking all over as she left the poison on the ground and started rushing out.

Opa saw that something fell off from zain’s hand, quickly went over to the unknown content and picked it up.

She called Zain who was rushing out.

“Lady Zain, please wait. this brown thing fell off from your hand.

Zain paused as her heart beat kept racing.
Opa walked up to her and handed the content over.

“Is not for m…meee, I don’t know what it is. Is probably yours…

Zain stammered, she threw the content back at Opa before running off.

Opa blinked twice immediately Zain said that.
She could swear that she saw the content fall from Zain but maybe her mind is playing tricks.

Opa threw the brown wrap into the burning firewood and it went up in flames.

She picked up what she came for and left.

Zain later went back to Mario.

“I can’t do it Lord Mario. I can’t. I have tried but I almost got caught. I can’t… is there another way. I don’t want to kill the Chief. Opa is too nice to me. I don’t want to hurt her either. Please let’s think of another way. I enjoy been the wife of a chief. That was the main reason I’m still here and also happy. Killin chief Dre will only make me a widow to a Chief…

” It seems all the assurance and promises I gave you once the deed is done means nothing to you. I want to make another offer. Since you like being wife to a chief, Romo has been talking to me concerning getting married. I will make you his wife if you play your role well. There’s no time. We have to strike now and take over the throne. Opa is your senior wife and she is only kind because she knows Dre have more love for her than for you. She only pity you Zain. You should be angry and deal with them. Don’t allow your conscience to play pity role on you.

” As much as your offer is very appealing I still do not know how your son Romo will marry me. I’m his uncle’s… or should I say cousin’s wife. It won’t work Lord Mario. Villagers will talk and may even label me bad if such happens. And you may end up finding a younger Lady for your son and break all your promises to me. Beside, Romo May not find me attractive…

Mario shut her up and said.

“You are already into this, there’s no goin back. I’m a man of my word. I will keep to all the promise I made. Whatever I tells Romo that’s exactly what he will do. So if I ask him to marry you, he will. You are the wife of the next chief and as long as Romo is on the throne no body will ever bother you. I’m counting on you Zain. Don’t fail me again, don’t fail me. Killing Dre will be your key to a more better life, I promise you.

Zain smiled. Knowing that she was going to be the first wife and probably the only wife of Romo, that was enough push for her.

She will deal with Opa for taking all of Dre’s love and attention from her.

Zain was again charged for the task ahead and promised not to make any mistake.

She told Lord Mario that she misplaced the first content and Lord Mario mixed another stronger one and gave her.

He warned her not to misplaced the poisonus content again or make any other mistake.
Zain assured her that she won’t.

*****.
Kaya was speeding down along the narrow bush part that she decided to take.
It was a shorter way to get to Zukumo but very dangerous.

Suddenly an arrow fly pass her, it mised her and landed on the ground.
Kaya did not stop, she continued to speeding down.

Her horse began to neigh.
The snorting sound signify danger.
The horse couldn’t move front or back as it stood still.

Kaya sense strange movement from the bush and waited for whatever it was.

Hefty men with bare chest came out from the crowded bush.
Some jumped down from trees.

They were hoodlums that attacks travelers and steals from them.

They suddenly started laughing when they saw Kaya on the horse
One of them said while accessing Kaya.

“Is even a young fierce looking lady not more than 17 to 20 years. With the way the horse was speeding I thought it was something more. Look, we don’t fight girls. Give us your horse, all your possession and be on your way. If you refused, we will still take everything from you which includes your fancy apparel and do whatever we wishes with your smooth body.

Kaya knew it was time to fight.
Beating 10 strong, broad shoulder men will be difficult but she will fight with her last blood.

She drew her sword out to face them.
They began to laugh sarcastically.

Kaya only plea to the gods is to keep her people safe in Zukumo kingdom and give her enough strength for the battle that was staring at her. 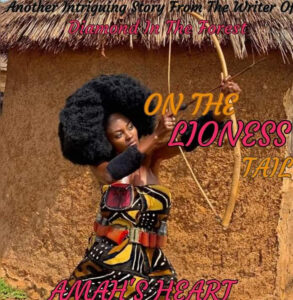